[German]At the moment, there are more and more signs that Microsoft has the next "big" update for Windows 11 (22H2), which will be released on October 5, 2021, ready and will roll it out soon. There are new PCs that already contain this version – and installation ISO files have already appeared. I had already speculated in August 2022 that the Windows 11 2022 Update would be released on September 20, 2022.

Sometime in late September or October 2022, Windows 11, which was released a year ago, will get a feature update. These feature updates will only be made available once a year (see Windows 10: Is Microsoft planning yearly feature updates?). Consequently, this build is internally at Microsoft called version 22H2. But Microsoft will reportedly call it "Windows 11 2022 Update" (see Windows 11: Upcoming version is probably called "Windows 11 2022 Update"). In that blog post, I had also mentioned September 20, 2022 as the release date (but that was a guess, because  that's the day preview updates for September 2022 might be released).

In the meantime, there are indications that this date may be kept. In the last few days, there have already been various messages and announcements on the web that Microsoft has finished the Windows 11 22H2 feature update and is about to roll it out.

I was not sure if this was actually shipping or not, but I just received a Dell laptop that has Windows 11 22H2, build 22621.521. I thought something was different as it had the new circle animation on boot.

Has anyone else picked up new hardware with Win11 22H2 installed?

So, the user in question received a new Dell notebook and already noticed differences in the animation when booting the machine. He later discovered that Windows 11 22H2, build 22621.521 was installed on the machine. After all, the OEMs receive the installation images several days in advance, so it is not entirely unlikely that such an installation will already be delivered by an OEM shortly before September 20, 2022. 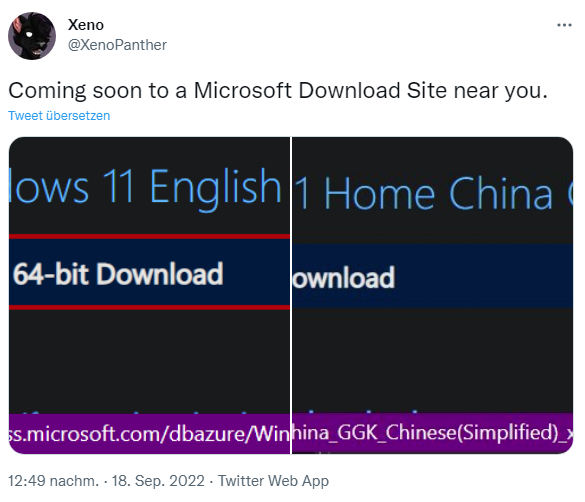 On Twitter, someone has also posted corresponding hints – and on this Techbench dump page as well as here, the respective links can also be found. A corresponding ISO file for Windows 11 22H2 Build 22621 has been linked by the colleagues from deskmodder.de in this article. Furthermore, they write that hints about the upcoming feature update can also be found in the registry.

Microsoft will upgrade Windows 11 (build 22000) to version 22H2 (build 22622) via a so-called enablement update, just like the current Windows 10 versions. This is an update of a few hundred kilobytes, which only unlocks the functions of Windows 11 version 22H2. This is because the functions and changes have already been distributed to Windows 11 systems as part of monthly security updates. The Enablement Update then unlocks these features and increases the build number accordingly.

According to deskmodder.de update KB5015669 will be responsible for this upgrade – the colleagues have provided the update here. So, if you have a compatible Windows 11 system, you could already switch to the Windows 11 2022 update. Or you can wait until the Enablement Update KB5015669 is officially rolled out via Windows Update – this could already be the case tonight.

In addition, the new version includes numerous UI improvements and an improvement in consistency. The "Windows 11 2022 Update" will be free for Windows 11 owners.