[German]Exchange servers (on-premises) have had woldwide a Year 2022 problem since January 1 (00:00 UTC), because mails are no longer transported due to a "date error". Meanwhile, Microsoft has confirmed this issue in a separate blog post. The developers are working on a fix, which should be rolled out soon. Addendum: A fix ist available.

The year 2022 started for administrators of Exchange servers (on-premises) with a fat Year 2022 problem, because mails can no longer be transported due to a "date error". The Microsoft Scan Engine FIP-FS cannot be loaded – and in the logs the event can be found:

The background is presumably that a date value encoded in a signed long integer with 2022 generates an overflow, which then causes the above error abort. The workaround is to temporarily suspend the malware scan or malware filtering. I had published the article Exchange Year 2022 Problem: FIP-FS Scan Engine failed to load – Can't Convert "2201010001" to long (2022/01/01 00:00 UTC) with additional explanations. 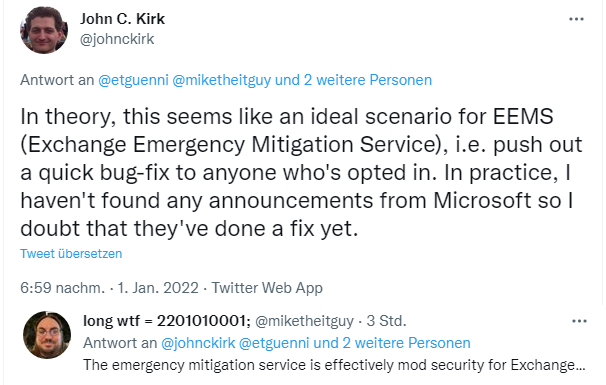 However, the deployment of such a solution takes time, as explained by Microsoft below.

German blog reader DW points out in this comment (thanks for that) the Techcommunity post Email Stuck in Transport Queues that Microsoft has since published. It says there that Microsoft is aware of an issue that causes messages to get stuck in Exchange Server 2016 and Exchange Server 2019 transport queues. There is no mention of the fact that, according to my information, this also affects Exchange Sever 2013.

The issue relates to a bug in the year-end date check, not a bug in the AV engine itself. It is not a malware scanning or malware engine issue, and it is not a security-related issue. The signature file version check causes the malware engine to crash, which causes messages to get stuck in transport queues. So that's what I described a few hours ago in the blog post linked above.

Microsoft is working on a fix for this problem. They expect to release details on how to resolve this issue later today (at the time of writing, this was not yet the case).

So at this time, they are saying, "We are currently working on another update that is in the final testing phase. The update will require customer intervention, but it will provide the fastest solution. So it's wait and see when this solution will come.

Addendum: The Microsoft Techcommunity article Email Stuck in Transport Queues hast been updated. Microsoft Providers a Script and instructions to fix the issue.D etails May bei read within the article.

This entry was posted in issue, Software and tagged Exchange, issue. Bookmark the permalink.