[German]I’m going to bring up a topic that I’m not sure how widespread it is. I think there are reports that the June 8, 2021 KB5003637 cumulative security update is again causing printing issues. Print jobs are not getting past the printer spooler, devices (Kyocera) are unable to print. Here’s some information on a bug that has been bothering Windows users for a while.

After installing the Windows security update of March 9, 2021, users reported significant printing issues, as I’ve reported within my blog.

Does update KB5003637 cause printing issues?

It was the following tweet that Patrick used to alert me to potential problems via Twitter. At Patrick’s, a customer suddenly couldn’t print on a UTAX (re-labeled Kyocera) because the job wouldn’t leave the spooler. 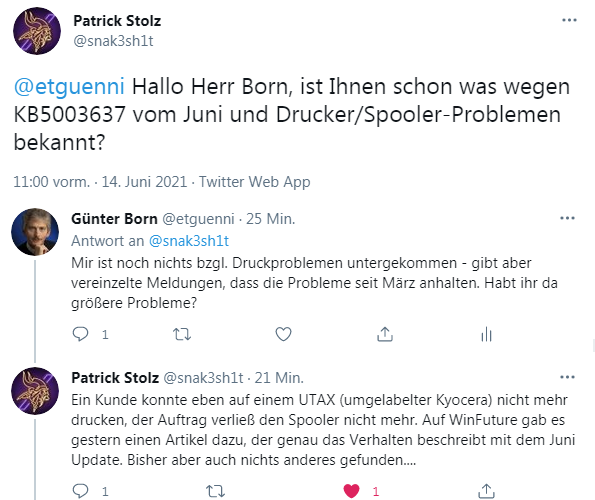 The mentioned article on WinFuture also only addresses the whole thing in a short sentence. Since the June update KB5003637 was mentioned, I searched the Internet and found what I was looking for. On reddit.com, a user reported this problem at the end of last week.

Anyone else having trouble with the Print Spooler service repeatedly failing after installing KB5003637?

I manage a couple dozen computers at a small business, all of them identical models, all running Win10 Pro (a mix of 20H2 and 21H1). They all connect to and share the same network printers.

Last night, as usual, Windows did its thing and proceeded to install the June updates on these systems, including KB5003637. Since then, multiple computers have been having issues with the Print Spooler randomly and repeatedly stopping/failing. Manually restarting the service works, but it’ll stop again within a few minutes. Restarting the computer doesn’t help, the same thing continues to happen.

I suspect KB5003637 may be the cause, because one of the fixes in it deals with the Print Spooler (CVE-2021-1675 Windows Print Spooler Elevation of Privilege Vulnerability). I am going to experimentally try uninstalling it to see if it fixes the problem, but in the meantime I am wondering if anyone else has been having trouble with the Print Spooler service on their systems since installing the June updates.

UPDATE: It seems that I was correct, KB5003637 is the cause, at least in my case. No reliable long-term fix has yet been made available (nor any mention of the problem from Microsoft), so in the meantime I’ve begun the tedious process of uninstalling the update on every affected machine, and pausing updates for a month with the hope that a fixed version of the update will be released during that time.

Within the thread, other affected people confirm exactly this problem. Also on SuperUser I found this entry where someone draws the error picture. After further research, I then noticed the post here (where the printing problems is mentioned in a side sentence) and this post. The remedy is to uninstall the update. Any of you affected by these printer problems? Does anything else, like changing Kyocera printer drivers, helps? I got the feedback, that reinstalling printers (Kyocera, HP etc.) has helped.

1 Response to Windows 10: Does update KB5003637 cause printer/spooler issues?