[German]Currently some peole are complaining about Microsoft's Windows 11, where fiction and reality are very different. The user community has been fed by Microsoft since the presentation of Windows 11 (Yes, Microsoft introduced Windows 11). New 3D emojis were announced in an Insider Build. Only with the delivery there were long faces, because the emojis looked quite different.

Another "weekend story" about Microsoft, it's Marketing and Windows 11. It seems, that Microsoft's marketing division is guiding the development of Windows 11 – it's not longer relevant, what customers need. And that Windows is an operating system that simply has to work seems to be a joke from the last decade. Windows has degenerated into a playground for marketing and freshman as developers.

What had Microsoft not promised since the presentation of Windows 11 (Yes, Microsoft introduced Windows 11) everything in terms of Windows 11 – can fly, brew coffee and gets a whole new user interface with rounded window corners. Marketing had also been feeding people with new emojis that were supposedly coming to Windows 11 soon. 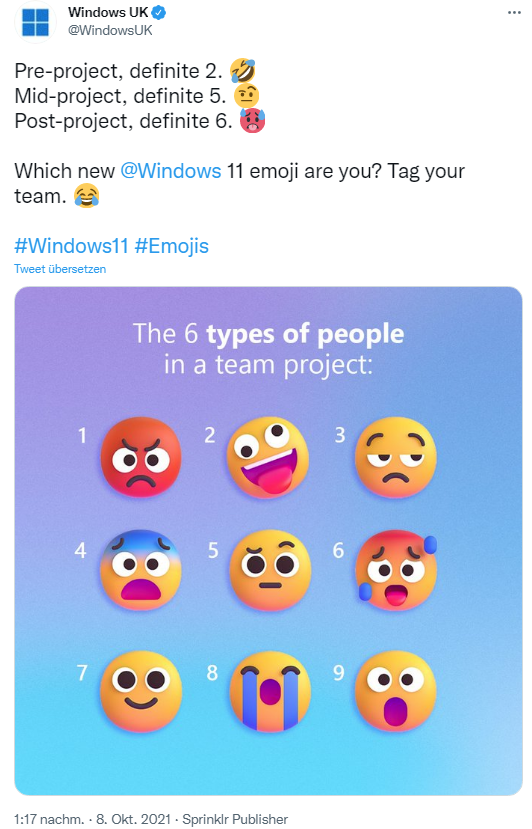 On October 8, 2021, the Microsoft team in the UK sent out the above tweet introducing these emojis – and the clientele is flying off the handle. I especially liked the icon in the upper left corner – the rest reminds me of chocolate lentils or buttons where someone has painted something on it. From the graphical aspect certainly quite cool …

I still don't understand the meaning of emojis for an operating system and where I would need them – it gets bitter when the operating system won't let me print, has a memory leak in the file manager and is otherwise quite buggy. But well, I'm old school, resistant to learning and no longer as a user for Windows 11. Windows 11 is just something for freshman, who can be fooled.

However, there is a small problem – which I wouldn't have noticed, because I haven't followed Insider Previews for a while. With the new Insider Preview build 22478 of Windows 11, Brandon LeBlanc has shown a set of emoijs for Windows 11. 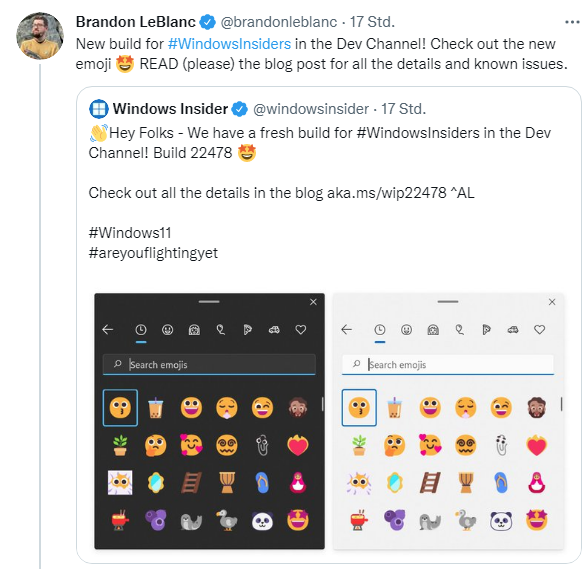 However, the result probably deviates "slightly" from what Microsoft's marketing had promised in a tweet shown above. Didn't go down so well with some people. One user picked up on this on Twitter and asked whether Microsoft is fooling or deceiving people. 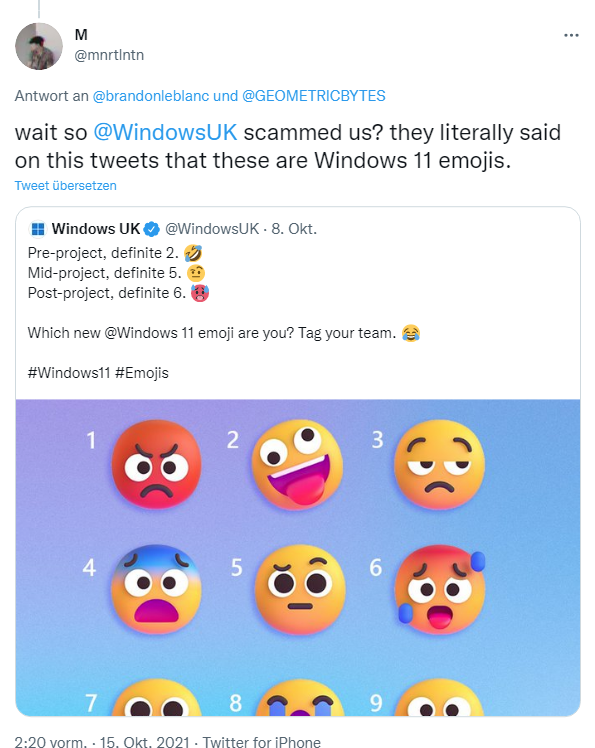 Well, poor Brandon LeBlanc was explicitly addressed in the above tweet and then promptly replied. The Microsoft marketing team did not deceive the people, and immediately the accusation that the user "exaggerated a bit" in his tweet.

The solution to the mystery: Microsoft marketing simply used the wrong graphics. Brandon LeBlanc is sorry about that. He says that Microsoft will make sure that they [marketing] use the right graphics in the future. It's as simple as that, it was just a wrong mistake – does anything still work at Microsoft? Well, it's an absolute nonsense story, it's weekend and I think I should call it a day.

1 Response to IconGate: Windows 11, the emojis and Microsoft's marketing