[German]The issues with Windows 11, which will be officially released by Microsoft on October 5, 2021, are slowly piling up. In the blog post Windows 11: Known issues (October 5, 2021), I had already reported about three problems admitted by Microsoft. Among other things, Virtualbox is not compatible. There is also a memory leak in Explorer (see AMD warns: CPUs run up to 15% slower with Windows 11). On AMD CPUs, there are also performance losses (see Windows 11: File Explorer has a Memory Leak). Now it turns out that certain apps are causing trouble because of registry entries. And it looks like Brother printers connected via USB can't print.

Microsoft documents the known issues in the "Known Issues" section of the Windows 11 status page (listed there as 21H2). 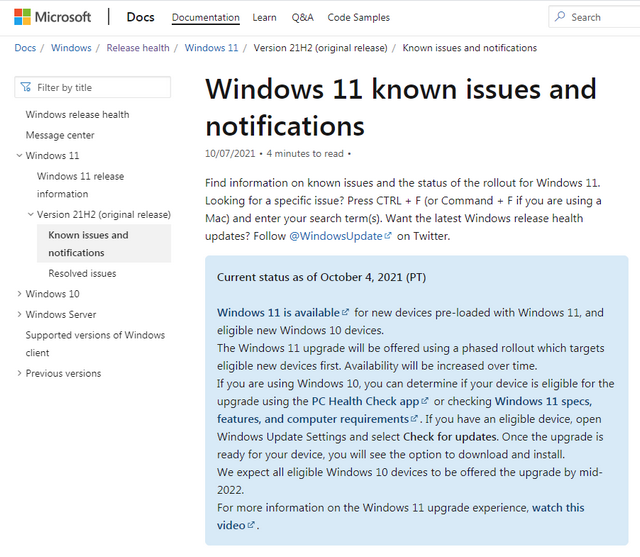 Besides the problems listed at the beginning (see also the article at the end of the article), Bleeping Computer reports cases where the Start menu does not open after upgrading to Windows 11. Also, there is a bug that some Windows 11 users get the old Windows 10 taskbar after the upgrade. Both bugs are not confirmed by Microsoft – details and hints for fixes can be read here at Bleeping Computer.

In the Known Issues list, Microsoft added another entry to a known issues section. There are compatibility problems with applications when they use some non-ASCII characters in their registry keys. Microsoft writes about this:

Compatibility issues have been identified between applications that use some non-ASCII characters in their registry keys or subkeys and Windows 11. Affected applications may not open and may cause other problems or errors in Windows. This includes the possibility of triggering a BlueScreen error.

Microsoft writes that affected registry keys with such non-ASCII characters may also be unrepairable. Currently, the problem is being investigated, but a fix is not yet available. Microsoft has imposed a compatibility lock for these devices. This means that users can neither install Windows 11 nor will the corresponding machines be offered the upgrade.

Brother printers do not work on the USB port

Brother printers also have the problem that they cannot print on the USB port. Bleeping Computer points out a corresponding warning from the printer manufacturer Brother in this article. Brother is currently checking the compatibility of the printers with Windows 11 and writes:

If you cannot use your Brother machine when you connect it to your Windows 11 computer with a USB cable, we recommend temporarily using a different connection type, such as wired or wireless, if available.

Updating your operating system to Windows 11 may prevent your computer from:

Overall, the (92) models listed below are probably potentially affected – and Brother recommends temporarily connecting the printers to the Windows 11 systems via a different interface (or doing without Windows 11).

Bleeping Computer also reports that users of 106 Brother printer models may receive an error message from the "USB Connection Repair Tool" stating that they cannot print to the USB printer. I assume that Brother will provide updated printer drivers soon. However, the whole thing shows that Windows 11 is simply not ready for practical use and for my taste is also otherwise developed past the need.

This entry was posted in issue, Windows and tagged issues, Windows 11. Bookmark the permalink.