[German]In Windows 11, there was a performance issue with certain NVMe SSDs. With certain random write operations, the throughput performance dropped up to 45% compared to Windows 10. The whole thing was discussed in forums on the Internet. After I picked up the whole thing on the blog, it also led to "not comprehensible" type discussions in the comments. Now, however, Microsoft seems to have addressed and fixed exactly this problem with one of the latest Windows 11 updates.

I had addressed it only within my German blog in the post Windows 11: Performance issues with NVMe-SSDs?  – and asked my reader about their experience. The topic raised here, after I found a mention on Windows Latest auf, that users of Windows 11 were complaining that they were only getting 45% of the throughput than Windows 10 machines in benchmarks under that OS in random write tests. Here are the benchmarks with CrystalDiskMark for Windows 11 and Windows 10. 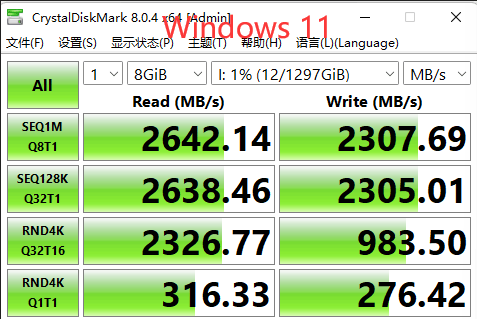 In the Random 4K test (RND4K Q32T16), the NVMe SSD drops to 983.50 MB/s in the write rate in Windows 11, while Windows 10 manages 2124.78 MB/s there. The differences are much smaller when writing sequentially to the NVMe SSD. The only drawback: A newer version of the Crystal Disk Mark benchmark program was used for Windows 11 than for Windows 10 – and similar systems were used in tests.

But the feedback from my German blog readers was more or less a  criticism, that apples were compared with oranges. Well, I would have accepted that for minor performance drops, but not for such serious differences in benchmarks. But I left it at that and did not pursue the topic further – the information was in my blog.

Recently German blog reader MrX1980 left the following comment in my German blog, pointing to a post from Windows Latest and a patch from Microsoft (thanks for that).

Supposedly fixed with KB5007262 and only affecting the C partition: Microsoft admits another Windows 11 bug is slowing down PCs (storage drives)

Fixes an issue that affects the performance of all disks (NVMe, SSD, Hardisk) on Windows 11 by performing unnecessary actions on every write. This issue only occurs when the NTFS USN journal is enabled.  Note that the USN journal is always enabled on the C: disk.

So the whole thing only occurs on the C: drive, but the unnecessary actions on writes were confirmed. I had indeed reported about this preview update in the blog post  Windows 11 Update KB5007262 fixes printing errors and many other bugs (2021/11/22).

However, I hadn't noticed such an entry – and when I checked my blog post, I couldn't find the entry in question. It looks like this was added to the support post after the fact. Long story short: It looks like Microsoft simply fixed the NVMe SSD bug in the preview, which leads to performance degradation and doesn't exist according to blog readers. The update should be distributed to all Windows 11 users on December 14, 2021.