[German]Since the release of Windows 11, there has been a compatibility problem with the virtualization software Virtualbox that prevented its use. Microsoft has now announced that this problem has been solved "externally". The developers, who now belong to Oracle, seem to have found the problem and corrected it. This means that Virtualbox can be used under Windows 11.

I had pointed out the issue in the blog post Windows 11: Known issues (October 5, 2021). Using Virtualbox together with Hyper-V was not possible in Windows 11. This was because Microsoft and Oracle had identified a compatibility issue between VirtualBox and Windows 11 when Hyper-V or Windows Hypervisor is installed.

As a result, virtual machines (VMs) might not start and an error would be displayed. Microsoft had imposed a compatibility lock that prevented these devices from installing Windows 11 or offering the OS as an upgrade on such Windows 10 machines. It was said at the time: Oracle is working on a solution and is expected to release a compatible version of VirtualBox in October 2021.

Oracle has documented the status of the conflict between Virtualbox and Hyper-V in ticket 20536 No VM will start on Windows 11 host. There it says in the meantime "fixed in 6.1.28". I had addressed the release of the version in the German blog post VirtualBox 6.1.28 freigegeben and also mentioned the fix for Windows 11 compatibility. But there was reader feedback there that Virtualbox 6.1.28 also did not make Hyper-V compatible on Windows 11. It then somehow didn't work out with the October 2021 fix for a compatible version of VirtualBox.

However, Windows 11 users who wanted to use Virtualbox could uninstall the Hyper-V server as a workaround. Then there was no conflict anymore. On the other hand, uninstalling Virtualbox caused Microsoft to lift the Windows 11 upgrade lockout for compatible machines. The machines should then have been offered Windows 11.

This officially only affected Windows 11 21H2 Pro, Enterprise or Education, as the Home edition does not offer Hyper-V. However, there are guides like here to install Hyper-V Server for Windows 11 Home as well.

I had seen it hours ago on various websites (e.g. Bleeping Computer) that the problem was reported as fixed. Microsoft had added the entry Compatibility issues have been found between Oracle VirtualBox and Windows 11 on March 11, 2022 in the Windows 11 status section in the resolved issues section. 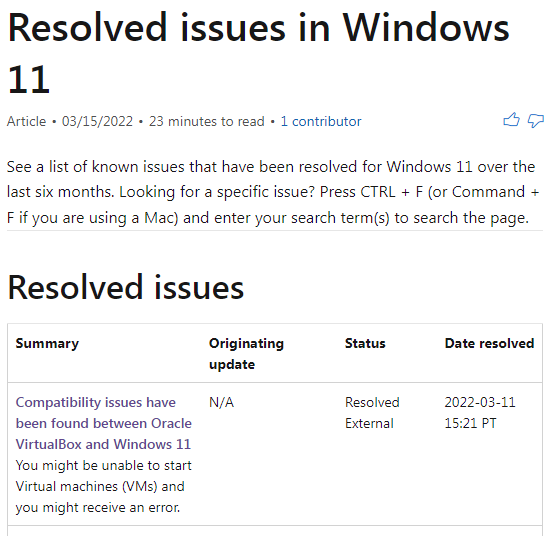 The section with fixed problems on Windows 11 now states: